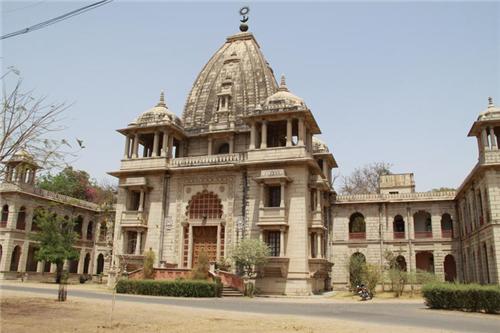 The memorial temple which was built to commemorate the father of our nation-“Mahatma Gandhi” is known as the “Kirti Mandir”. This temple is situated in the Porbandar city which also happens to be the birth place of Mahatma Gandhi. In 1947 the foundation stone of this attractive temple was laid, however the construction work of the entire temple was concluded in the year 1950. By that time Mahatma Gandhi had expired. Kirti Mandir is one of the prime attractions of Porbandar which was constructed by Sri Purushottambhai Mistry and Sri Nanjibhai Kalidas. 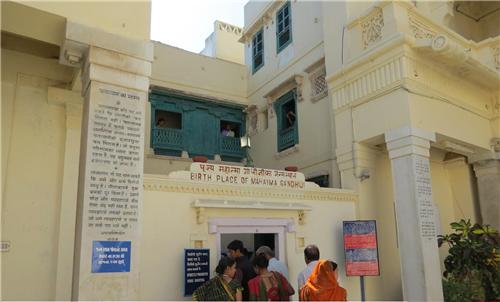 Gandhi Ji was born on 2nd October in the year 1869 and his ancestral house lies in the vicinity of Kirti Mandir. In 1944, when the British Government unconfined Mahatma Gandhi from Aga Khan Palace, the residents of Porbandar had made a decision to build a memorial at this very place.  Prior to the establishment of Kirti Mandir, the ancestral house was bought from the family members of Gandhi Ji who were residing in it.

Gandhi Ji gave his written consent to Sri Nanjibhai Kalidas along with all the legal documents required for selling the entire building. The registration papers with the signatures of Gandhi Ji can be seen in a museum room inside the complex of Kirti Mandir. Thus, Gandhi Ji’s ancestral house is now a part of Kirti Mandir compound.

The ancestral house of Mahatma Gandhi looked like a Haveli with 3 storeys. This house was purchased by Sri Harjivan Raidas Gandhi (the great grandfather of Gandhi Ji) from a local lady and within a few years the upper storeys were built. This house was inhabited by Karamchand Gandhi (father of Gandhi Ji), Uttamchand Gandhi (grandfather) and Tulsidas(uncle) who had been the Prime Ministers to Jethwa Rajput emperors of Porbandar.

In the year 1947, Shri Darbar Gopaldas Desai laid the foundation stone of the gorgeous Kirti Mandir. The entire construction work was done by Nanjibhai Kalidas who also purchased Gandhi Ji’s ancestral house and erected the new complex of Kirti Mandir.

The construction work of the memorial was finished in 1950, but that time Mahatma Gandhi was not alive. In the year 1950, on 27th May, Sardar Vallabhbhai Patel, then Home Minister inaugurated and confirmed to make this place open for the public. Thereafter, this stunning memorial was entrusted to Central Govt. of India.

The Kirti Mandir in Porbandar is also well-known as the “Temple of Fame”. This majestic monument is of “E” shape and comprises terraces, domes, a few balconies and a “Shikhara”. The height of the central “Shikhara” is 33 m and it is built in the Hindu style of architecture. The total cost to build this elegant memorial was Rs 50000. The interior of the Kirti Mandir is marble finished and is regarded as the cenotaph of “Gaekwads”. 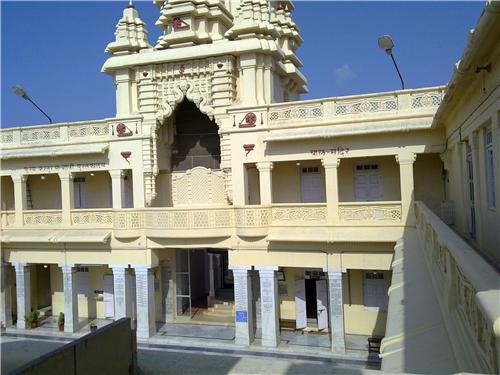 The temple is about 79 feet high which signifies the 79 years of existence of Mahatma Gandhi. The memorial symbolizes the sacred assimilation of 6 religions. Moreover, the architectural elements of Buddhist, Parsi, Hindu, Jain temple, mosque and church are also incorporated at Kirti Mandir which signifies Mahatma Gandhi’s respect and love towards all religions.

The credit for the entire architecture of Kirti mandir goes to Sri Purushottambhai Mistry. Purushottambhai toiled day and night and finished the whole construction work of this memorial within 2 years. 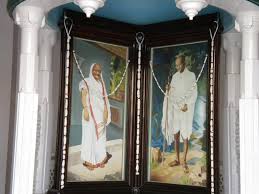 The center of the Kirti Mandir houses the full-size oil paintings of Kasturba Gandhi and Mahatma Gandhi. Gandhiji’s encouraging words “Non-violence”, “The Truth” etc. which he used to preach throughout his life are placed close to the feet of his paintings.
Apart from this, the Kirti Mandir also houses 2 memorials of Mahadev Desai and Maganlal Gandhi in two separate rooms. There is also a museum which displays some old pictures and a few belongings of Mahatma Gandhi such as handicraft items and khadibhandar stuff, some books related to Gandhi Ji and his philosophy, an office room and finally a reception hall. Inside the Kirti Mandir the visitors can also visit the Kasturba Gandhi library which has a plethora of books to offer.

Kirti Mandir is a royal monument which is visited by many politicians of India as well as foreign dignitaries. In order to identify the birth place of Gandhi Ji, it is marked with a “Swastika” sign.