Porbandar in India is recognized universally as the birthplace of Mahatma Gandhi and therefore attracts a large number of people who visit the place for its historical significance. But what good is any place if there is not enough connectivity with it; it is the convenience with which people can reach it makes it popular among the masses. People are greatly aided with the rail services moving in and out of the coastal city of Gujarat which forms a lifeline for both tourists and locals. To know more about the various trains that ply to and from Porbandar, read ahead.

Trains from Porbandar to Mumbai

Mumbai is one of the most favored cities for travelling in India. Apart from being the commercial capital, it also has a great entertainment quotient on offer for the tourists which invariably attract hordes of people from Porbandar to it; some looking to simply tour the city while others to try their luck! There are a couple of trains that ply from Porbandar to Mumbai which are-

Saurashtra Express plies every day of the week and on weekends too and takes the passengers to Mumbai Central Railway Station. But the Secunderabad Special is operational only on Mondays and the point of arrival is Kalyani Junction. The tickets are popularly and conveniently booked online from various portals and people make their way into the land of Bollywood to experience and taste all the glamor. The city that never sleeps also keeps the tourism alive for people coming from Porbandar.


Trains from Porbandar to Delhi

Delhi needs no introduction in India. As the capital of the nation it has a great influx of people from all parts of the country and likewise from Porbandar it has people coming for a large variety of reasons. Some of the people are essentially tourists while there are some who have pressing work in the bustling metropolitan city. Therefore, in order to connect the coastal city of Porbandar and New Delhi, there are trains which are-

The Pbr Motihari Express takes about 1 day 4 hour and 50 minutes to reach Delhi and operates on Thursday and Fridays while the Delhi Sr Express functions on Tuesdays and Saturdays and takes about 20 minutes lesser to make the passengers reach to their destination. However, this second train’s destination is Delhi S Rohilla. Apart from these two trains, there are other ways of reaching the capital but that would mean taking trains to Ahmedabad Junction or Vadodara and then boarding another train to Delhi.


Trains from Porbandar to Howrah

Howrah or Kolkata is one of the culturally rich cities of the nation. Apart from the various historical places worth visiting in the city, it also has an inherent charm which is the reason why people travel from various places to come and enjoy the city. Porbandar has its own share of people who travel the distance to come to Kolkata. The train felicitating them is- 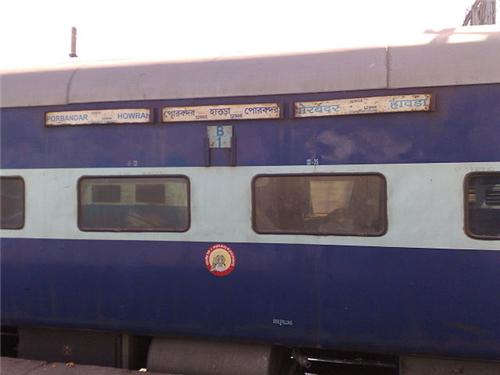 The Porbandar Howrah express covers distance from Porbandar to Kolkata in about 44 hours and 35 minutes and runs on Sundays, Wednesdays and Thursdays. The Kaviguru however plies only on Fridays and takes passengers to Santraganchi which is closest to Kolkata. For quick reference be known that a 2A class seat in Pbr cost 2743 Rs, the 3A is for 1843 Rs and SL is for 701 Rs.


Trains from Porbandar to Chennai

Chennai is the jewel of the south and holds a position of prominence among the people since it is regarded as the gateway to the south. There are no direct trains which take passengers from Porbandar to Chennai but people wishing to go to Chennai can try the nearest stations of Surat, Ahmedabad Junction and Maninagar.

However there is one train that takes passengers to Kerala- the Porbandar –Kochuveli Express which runs on Thursdays and covers the distance of 1700 miles or 2720 kilometers in 1 day 20 hours and 55 minutes.

Apart from such trains which travel long distance to the metro stations, the railways also have many local trains which ply from Porbandar to nearby places.

Therefore, Porbandar proves to have great connectivity with some of the prominent cities of the country and falls under the Western Railways Zone. It boasts of being the broad gauge railway station and also caters to the port of Okha. Functioning under the Western Railways since November 5, 1952, its most recent accomplishment has been the gauge conversion of the Wansajaliya-Jetalsar Section which has given greater accessibility to Somnath since the year 2011. It has been quite a journey from the Porbandar State Railway which was once ruled by the princely statures but has come a long way since then.

Porbandar Railway services offer great convenience to the people of Porbandar and makes for some very memorable journeys to other parts of the country.

Explore more about Transport in Porbandar